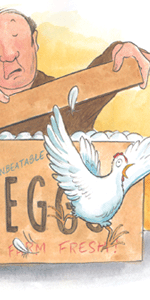 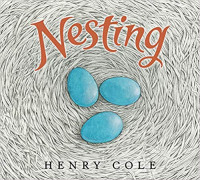 ’Nesting’ receives Starred Reviews from all four major reviewer publications!
Award-winning author-illustrator Henry Cole soars to new heights in this stunning picture book about robins: their homes, their lives, and their families. In this black-and-white picture book highlighted with robin’s egg blue, the reader will follow two robins as they build a nest with twigs and grass. Then mother robin lays four beautiful blue eggs and will keep the eggs warm in the nest until they hatch into four baby robins. The father robin protects the babies until they can fly on their own. The perils the babies encounter are many, including snakes and storms. The nest is always their safe place. Nesting provides introductory biology and animal science concepts for very young children, and also makes a spectacular springtime gift. Award-winning author-illustrator Henry Cole has re-created the life story of the robin with simple text and stunning artwork. Nesting is the perfect primer for young bird-watchers and nature lovers. The beautiful, intricate black-and-white illustrations are illuminated with lovely washes of blue that breathe life into the artwork.
Date2020
ISBN0062885928
ISBN-13978-0062885920
Purchase
Order on Amazon Order on B&N

Robin's-egg blue highlights this account of an American robin family's year. Cole uses thin black lines and crosshatching to limn the tree, the tree branch from which a male robin sings in early spring, the responding female, and the nest they build. The first pages are entirely black and white; the first hint of color appears as a blue-washed sky behind the tree as the birds begin their nest; two page turns reveal the familiarly colored egg, its bright color contrasting arrestingly with its black-and-white surroundings. Then there are two, three, four eggs and the mother robin's patient incubation. After the nestlings hatch, a 12-panel spread shows the adult birds flying back and forth with insects and worms for the babies. First a storm and then a hungry snake provide suspense, but the parents shelter and defend their chicks successfully. Eventually the young robins fledge. "Soon they grow strong and can feed themselves. Their wings take them anywhere they want to go." Cole varies the design from vignettes and panels to full- and double-page spreads. Sometimes viewers are close up; at other times they see the scenes from a distance. The relatively simple text, expressed in short sentences, is very accessible, and the natural history, ending with fall berries and the overwintering family, is accurate. Aimed at a younger audience than Eileen Christolow's Robins (2017), this conveys essential information without the other title's anthropomorphism. Beautiful, informative, and appropriate to the audience. (author's note) (Informational picture book. 3-7) —Kirkus (Starred Review)

Like proverbial spring, this story begins with a song: “From the branch of an apple tree, a robin starts to sing.” Two robins meet and begin to build a nest. Eliding reproductive mechanics, Cole’s detailed story follows the birds as eggs are laid and hatch, and as the parents work to feed the chicks and keep them safe in a world of dangers, including dramatic scenes of a thunderstorm and a hungry snake (“The robins fight back! They dive and swoop!”). The chicks grow: they fill the nest, then drop, “one by one,” to the ground below. The book closes with the poignant image of the abandoned nest, filled with snow. Cole’s fine-line drawings—black-and-white, with occasional washes of robin’s-egg blue—use short, agitated lines and layered hatching to richly render the birds’ world. A brief author’s note offers additional information about robin nesting habits. Ages 4–8. —Publishers Weekly (Starred Review)

A male robin’s song drifts through the spring air, attracting the attention of a female. As a pair, they find the perfect tree in which to build their nest, where the female lays four eggs, naturally rendered in robin’s egg blue—the book’s only color. For the majority of the illustrations, Cole uses black Micron pen to line and crosshatch scenes of incredible detail and beauty, filling full pages and double-page spreads with the robin parents’ activities and that of their growing babies. Drama blows through in the form of a storm and, later, a hungry snake, but the family makes it safely through both scenarios. Finally, the babies grow big enough to fly and feed themselves, fattening up for the arrival of winter. Though considered fiction, everything in this story is true to nature, which is unsurprising considering Cole’s past as a science teacher. He uses limited but smoothly written text to describe a year in these robins’ lives, appending a page of robin facts to the end of the story. The arresting artwork is large enough to share in a group setting, but youngsters will also want to pore over its many details. This would make a lovely companion to Rita Gray’s Have You Heard the Nesting Bird? (2014) or Kevin Henkes’ When Spring Comes (2016). —Booklist (Starred Review)

PreS-Gr 3–A robin heralds the arrival of spring with a mating song from an apple tree. A female hears him and together they gather twigs and leaves for a nest. Soon there is a lovely blue egg, then three more. She keeps them warm, sitting and waiting, and in about two weeks there are four blind, featherless hungry babies. Now the parents are busy feeding and protecting them. They each make many trips bringing juicy worms and caterpillars to the nest. One day, a snake slithers up the tree, threatening the little family. Mother and Father do what they can to drive the predator away. Relentlessly, they dive and swoop, dive and swoop until the snake falls to the ground. In a few weeks, the babies fill the nest, feathered and grown. Now they can look for their own food. Cole’s nature sketches reveal a keen eye and hand; the birds are shown from different angles up close and from afar. The artwork is done with a black micron pen with an occasional blue acrylic wash for sky or eggs. VERDICT A stellar offering. Nature lovers of all ages will enjoy this beautiful, informative book. —School Library Journal (Starred Review)